When fully assembled with a foundation and roof, this structure is highly earthquake resistant and hurricane resistant as well as being highly energy efficient. It benefits from an octagonal shape that incorporates 20% more floor space than the same materials in the shape of a rectangle, while offering less sail surface to oncoming winds.

It can be assembled on bare ground in four hours or a waiting cement pad in two hours by two unskilled workers using only tin snips and an electric drill. As in many vernacular Carribean “casitas,” it can serve as core protection that a family could add to with porch, shed roof, tents or salvaged materials for additional space. Ten months after the 7.0 earthquake struck Haiti, more than one million people are still homeless. The NGO, Koneksyon Ayiti, Haitian Connection, will facilitate the placement of the structures. 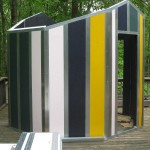