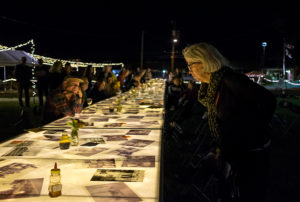 The Table is a 100-foot-long light table created as part of a social practice, community arts project mounted by Second Stage Amherst. Titled Cultivate Amherst!! it was a collaboration with Edgar Endress, Suny Monk and a host of others to bring the community together “to the table” for dinner and conversation in a spirit of respect and unity.

Gathered on the table are 300 + transparencies of historical photos representing the diversity of the county, including many from the Monacan Nation that has occupied the county since long before the Europeans arrived. 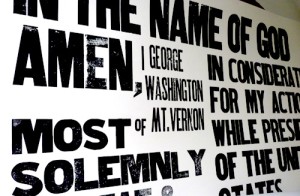 In the Name of God. Washington and Lee University. 2012

The expanded artwork was on exhibit at the University of the Arts in Philadelphia, February 12 – 27, 2013. It  included letters and communication between Pleasants and the students, staff and administration of Washington and Lee, and with Koneksyon Ayiti, the NGO that was to facilitate the construction of the houses.  Some of that communication is below.  More 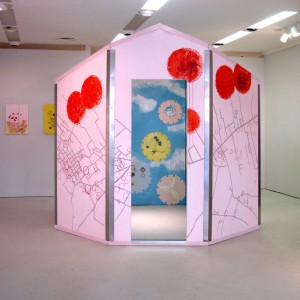 When fully assembled with a foundation and roof, this structure is highly earthquake resistant and hurricane resistant as well as being highly energy efficient. It benefits from an octagonal shape that incorporates 20% more floor space than the same materials in the shape of a rectangle, while offering less sail surface to oncoming winds. More 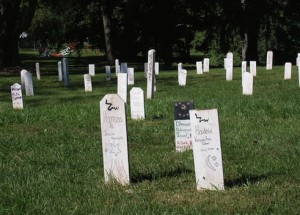 On the first day of classes, I sent to Mr. William Rowe, Head of Thomas Jefferson School, eighty-eight grave markers, one for each student at Thomas Jefferson School, plus one for artist-in-residence Greg Edmondson and one for myself. These markers were distributed to each student by the Head of School and the artist-in-residence. The students, aged 14 – 18, were asked to find the name of an Iraqi civilian who had been killed during the fighting of the previous three years and write that person’s name on the grave marker.  If possible, students should select someone of about his or her own age and gender, and someone whose name begins with the same letter as his or her own name. More